Robin Williams, Despair and Mental Disorder. Could we have healed it?

“REALITY: WHAT A CONCEPT!” 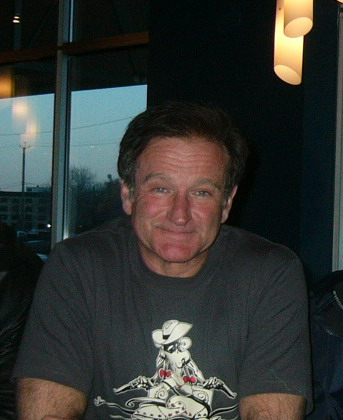 I write, like so many others, following the death of Robin Williams, from a space of shock and compulsion.

Robin Williams was an archetype – in a way, the archetype of bipolar disorder, a mental disease affecting as much as four percent of the population. Bipolar is just a label – yet most of us have encountered those brilliant individuals that swing between depression and mania, highs and lows, often with a devastating cocktail of drug or alcohol addiction mixed in. Their lives more often than not, spiral into a chronic position where early death by suicide or accident seems to be almost a destiny.

Why? Because these remarkable individuals are often simply unable to take the medication presently available for bipolar disorder or manic depression. They refuse it. It flattens their moods, desensitizes their sense of momentum, replacing the high peaks of mania and the dreadful troughs of depression with a mid-way trough of non-responsive depression. They feel half alive. It might give a band-aid break in order to treat deeper trauma, but as a long term solution it usually fails.

So often, sufferers of Bipolar Disorder try to self medicate. In an attempt to avoid the depressive side, and the despair frozen within this collapse, they sustain the highs through avoiding sleep, shunning solitude, and most often using alcohol or drugs. This radical addictive cycle, based on avoiding the pain, also makes immediate psychiatric diagnosis and treatment a hazardous affair. (Is this person mentally ill or just blind drunk?)

Would the world have chosen to have been robbed of the genius of Robin Williams by psychiatric drugs that cut his wings and  flattened his swings between mania and depression? Would he have been ethically OK, to himself deny us the decades of joy, wisdom, tenderness and comic absurdity that have lifted our hearts? Did it really have to be an either-or choice, ending in self destruction?

In recent years, Williams went into rehab. for his returned alcohol addiction. The teetotal period had ended when he was on location in Alaska in 2003.

“I was in a small town where it’s not the edge of the world, but you can see it from there, and then I thought: drinking. I just thought, hey, maybe drinking will help. Because I felt alone and afraid. It was that thing of working so much, and going fuck, maybe that will help. And it was the worst thing in the world.”

It wasn’t the depression, Williams told The Guardian, it was the pure existential fear:

“It’s just literally being afraid. And you think, oh, this will ease the fear. And it doesn’t.”

What was he afraid of?

It’s almost impossible to find information about William’s early childhood, which in itself suggests some kind of blanket of denial. It’s not there. Still, two half-brothers mentioned in Wikipedia seem to signify a divorce.

What is there is that Williams was intensely shy and an only child. In moving to California, he found his talent in comedy brought social acceptance and this inner quality and passion for acting seemed to replace a deeper trauma or grief – the pain frozen within the younger Robin.

But pain doesn’t go away for long, even with alcohol, drugs and all the success in our modern world. It waits, like a demon in the heart to be healed, one way or another. The professionals in the most recent rehab. center relieved Williams of the alcohol relapse, but left the existential terror untreated.

How many therapists today have enough spiritual development to be able to allow and contain existential terror at the level of consciousness and existential despair at the feeling level of awareness? The reflex choice of long-term psychiatric medication would seem to suggest very few.

Still, Williams’ disease still could have been managed within the manic depressive flexibility of  Hollywood. But last year, William’s heart itself broke, leading to open heart surgery, when surgeons replaced his aortic valve with one from a pig. The existential fear became irrepressible.

“Oh, God, you find yourself getting emotional. It breaks through your barrier, you’ve literally cracked the armour. And you’ve got no choice, it literally breaks you open. And you feel really mortal.”

Horrifically, the intense fear and consciousness of death led Williams to defy death through taking control in what is now reported as suicide. At that critical moment, the individual becomes caught at the cliff edge of identity where even death itself – and the suffering around it – is less terrible than the perpetual hellish anxiety of living in the shadow of death.

In Bipolar Disorder, a traumatic pain, loss or grief frozen at a young age causes people to spiral around existential despair. Intensely fearful of encountering the unfelt and unrealized ‘horror’ frozen within the depression, the terror of the taboo monster in the heart swells to inconceivable proportions. With pure survival vitality, the gifted individual compulsively seeks an audience, doing everything possible to sustain the high and avoid a deeper awareness of negative feeling. That means also avoiding sleep. This in itself polarizes the highs and lows. At some stage, the mental hold, under sheer pressure, involuntarily cracks into pure consciousness.

Yet too much consciousness, such as the pure force of nature in Alaska, intense schedules, and a critical level of sleep deprivation, can create an uncontrolled spiritual awakening which is terrifying. It terrifies, because conscious awakening, beyond the mind, by reflex opens the dimension of awareness and deeper feeling – the dimension of the repressed despair. Enclosed in an unprocessed fear of death, the situation escalates through this catch 22 bypass of disallowed negative feelings to chronic proportions. Robin Williams reached for the bottle, for now.

The tragedy is that there are ways to treat bipolar disorder which don’t only involve the use of mood-suppressing and quality-erasing medication.

Trauma work, including Emotional Freedom Techniques and Somatic Experiencing, combined with behavioural therapy, can support the opening of the frozen plains of awareness. This can lead to a life style which keeps the genius while regulating the perilous extremes. For this, it is essential the individual be first free of substance addiction.

Robin Williams was bigger than his agony. He knew it, but he couldn’t find an emotional and biochemical form to express this. The result is his suicide.

In the future, I hope and pray that the therapists who had the chance to support this beautiful life will have the spiritual tools and the respect and understanding of the therapeutic dimension of sentient awareness, to truly be there for others like this tremendously sensitive and wounded individual. It is not his death that hurts. It is his untreated despair.

May he rest in peace, healed by the sentient wisdom of the universal love that gave him form.

Georgi Y. Johnson is a spiritual teacher and author of I AM HERE – Opening the Windows to Life & Beauty. The I AM HERE teachings offer spiritual tools to refine consciousness, awareness and perception through emptiness.

You are not alone.

Lessons After the Death of My Partner