The Keepers of the Beauty 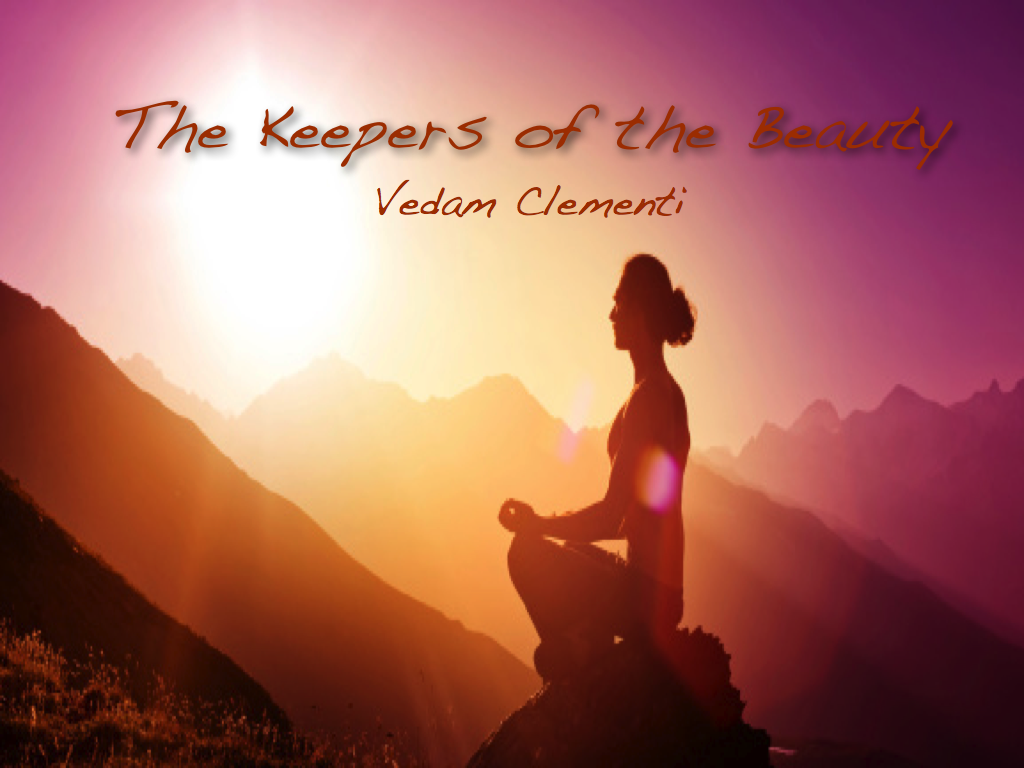 Many years ago, I became very interested in the ‘Universal purpose’ of being gay. I spent months upon months searching for anything that would give me some insights regarding this idea. Unfortunately, I had no luck finding anything, so I began to search in another form; meditation. I asked the Universe to enlighten me, so I begin to sit down and meditate on this subject. Weeks went by, and the meditations were peaceful, and enjoyable, but still no insights. Finally, I gave up. A few weeks later, I was on the massage table, receiving body work, and all of a sudden, I began to see a vision in my mind’s eye. I call it a vision, but it was more like a movie; a movie that began in one period, and moved very quickly through to another. Each scene gave me just enough information to understand it, and then it moved to the next time or scenario. Needless to say, I got off of the massage table crying, humbled, and honored; I got up and wrote down the vision immediately. Here is what I saw...

The world was in perfect order, and perfect harmony. It flowed consciously and clearly. Since there were no clocks, no alphabet and complete openness, the people roamed the Earth. They listened to the Earth, and they felt the vibrations from the Earth. They talked clearly and understood what the Heavens and the Earth was saying to them. They understood power, energy, and electricity, even without science. They shared the Earth, the Air, the Seas, and the Heavens. They knew whatever they did, there was an effect, and they lived in this purity. Then one day, the ice began to melt and the seas separated the land. People became more stable, more locked into their lands. There was land that could be claimed and worked. They began to settle. They still lived in the harmony of the vibrations, but now they became ‘task-makers’. There were the crop-makers, there were the herd-keepers, there were the weavers, and there were the fisher-people. There was a place for everyone; even the gay people, the people that vibrated differently. Everyone knew they were vibrating differently because everyone sensed each other’s vibration. It was pure and beautiful. The gay people were the ‘Keepers of the Beauty.’ Because they vibrated differently, they were the Artists, Poets, Healers, Mediators, Teachers, and Guides. The other people felt they were closer to God because of the unity of ‘two within one.’ They revered these people.

Mothers upon conception sensed the vibration of their yet unborn children, and feeling the vibration was different their own, they gave thanks. The Gods had blessed them with a ‘Keeper of the Beauty.’ The leaders of the tribe prepared for the incarnate soul of the Gods. The ‘Keepers of the Beauty’ danced and celebrated the coming of another. It was a gift; a gift they could not give to themselves, as their vibrations couldn’t allow birth. Their vibrations were about re-birth. A child was coming, a ‘Keeper of the Beauty.’ The infant was given to the tribe when the Earth told them the child was ready to leave its parents and go to its teachers. The child had been birthed, now it was time to be re-birthed.

Many years later, as people became more locked to their land, this in turn changed the energy of the Earth, and this led to fear. People began to hear with their heads and not their hearts. They began to fear God. They also began to fear each other’s power. The ‘Keepers of the Beauty’ saw this change, they sensed this change, and they spoke of this change. They began to remind people of their oneness with God. They spoke of the union of all with all, and people became more afraid. They thought the Gods were playing a trick on them. They no longer felt the union. They hadn’t for so long, they even forgot that they ever had. How could these people, the ‘Keepers of the Beauty’ feel God? How could they walk the Earth and walk in the Heavens at the same time? They had to stop their walks; they just had to! Out of fear and desperation, they chopped their legs off at their hips. If they could stop their earthly walks, they could stop their celestial walks. They just had to!

This didn’t stop the ‘Keepers of the Beauty.’ They didn’t need legs to migrate and share what they knew. Their hearts, their spirits, their souls, and their sights went everywhere and anywhere they needed to go. They were still connected to the ‘Oneness.’ They were even more connected now that their coccyx actually touched the Earth. They raised their arms and hands to the Heavens; they gave thanks. They sang and chanted; they called the spirits. They danced with their arms. This frightened the people even worse. How could they break their bodies and not break their souls? How could they raise their hands to God and still give thanks after what had happened to them? The people knew what they now had to do; they must get rid of them. They chopped their arms off at their shoulders. They had to stop their dance!

So what does this mean to me and mine? To tap the channels of our forefathers, our brothers, our lovers, our selves. The message still rings true today as it did then. To reconnect with the ‘Oneness’. To allow it to permeate through our feet as we walk the Earth. To allow it to connect in our inner eye. To allow it to feed our hearts, to ring true in our souls. To allow it to be the “I Am” it was meant to be. It is still as true as it once was. Still is. To be a ‘Keeper of the Beauty’ as we once were. To allow our art to shed light into the darkest recesses of our mind. To allow the healing of our hearts to heal the heart of consciousness. To grow into the light of a pure God. To grow within our sacredness. To grow within our birthright. To truly know that there is nothing that can happen to us that is more horrific than what has been revealed. To know our power, to embrace it, to love it, and to allow it to do its work.

As God blesses us in our place in this world, I let it be so, and so it is.

Vedam Clementi is a Spiritual Teacher, Life Coach, Meditation Coach, Author, and Lecturer. A full recovery from paralysis using spiritual concepts, meditation, and natural healthcare led to Vedam’s spiritual awakening and desire to share what he has learned. Vedam has taught fellow souls for over a decade to leave the past behind, plant seeds for their desired tomorrow, and to be present in each moment as they move through life. Vedam has a unique way of uniting psychological and spiritual tools that support the individual to relate to themselves, others, and life in a new way: openly, lovingly, and authentically.

WHEN THINGS GET TOUGH OUR EVOLUTION TAKES ANOTHER STEP

IINNER STRENGTH MEDITATION: RETURNING TO JOY OF LIVING DURING CORONAVIRUS

The Number Six and the Essence of June

The Wheel of Fortune Card: The Tarot Arcane for June 2020