2015 - Parliament of the World's Religions: Reclaiming The Heart of Humanity

Have you ever walked into a downtown area and heard the thunder of distant drumming weaved with the heavenly hymns of sacred chants as a kaleidoscope of colorful robes of every major, religious tradition walked by?  Could you imagine 10,000 people from over 50 traditions from all over the world peacefully gathering within a half a mile area under one roof uniting to consciously and compassionately address some of the major world issues affecting us?

From October 15 – 19, 2015, the Parliament of the World’s Religions hosted such an event at the Salt Palace Convention Center in Salt Lake City, Utah.   Nestled within the Wasatch and Oquirrh Mountain Ranges at an elevation of 4,330 feet, the city known for being the home city of the Church of Latter Day Saints and host of the 2002 Winter Olympics, opened it’s heart to an event that was more than a mere convention. “Reclaiming the Heart of Humanity” ignited religious and lay leaders to travel from every corner of the world to not only represent their faith but to meet others in the name of compassion, peace, and love.

The Parliament of the World’s Religions had its first gathering in 1893 in Chicago “during the World’s Columbian Expositions” with the memorable Swami Vivekenanda who brought Hinduism to the West as he greeted attendees as “Sisters and brothers of America.”  One hundred years later, the Parliament gathered in Chicago to celebrate the centennial of this interfaith movement that “promotes understanding and cooperation among religious communities and institutions.”  Since then, the Parliament has convened in Cape Town, South Africa, Barcelona, Spain and Melbourne Australia.

In the predawn hours of the 2015 Parliament’s historical Women’s Plenary Session that preceded the official opening, members of the Indigenous tribes of Utah - Ute, Paiute, Shoshnne, Navajo- as well as other tribes of Turtle Island gathered to light the Sacred Fire at the 200 West and West Temple corner of the convention center.  The Fire Keepers tended to it 24/7 throughout the entire event.

A tall, blind holy man with long, black braids, Arnold W. Thomas of the Shoshone tribe (who later ordained the attendees at the Indigenous Communities Plenary Session to go heal Mother Earth), escorted by his fellow Indigenous brothers, shared with those gathered underneath Venus, Jupiter, Orion and the Pleiades above that the Sacred Fire is the “direct connection to the Great Creator.”  In the aromatic infusion of tobacco, sage and sweetgrass, prayers and offerings were made by four grandmothers in the four directions that united the participants in a sacred way.

The ancestors and spirit guides were palpable and present.  Parliament participants were invited to make their own offerings invoking gratitude and guidance throughout the week as they were smudged and given direction.  Even while it rained a few evenings, the Fire Keepers never allowed the flames to diminish. Flute music, conversations, connections convened at this holy site.  The energy pulsated with possibilities.

As one walked into the convention center doors, the Tibetan monks from the Drepung Loseling had their space ready for their opening ceremony for the creation of the Mandala of Avalokiteshvara, the Buddha of Compassion.

The Mandala Sand Painting requires millions of grains of colorful sand that are mindfully created in the geometric pattern of a “traditional prescribed iconography.”  Daily they worked on the mandala in such grace and focus. Throughout the week, participants paused out of curiosity and respect to the progress of the mandala and prayerful heart of the monks.

Powerful speakers such as Marianne Williamson, Rev. Michael Beckwith, Dr. Jane Goodall, Dr. Eboo Patel, Dr. Vandana Shiva,  Dr. Rangimarie Turuki Arikirangi Rose Pere,Mother Maya Tiwari, Chief Arvol Lookinghorse, Katie Jo Welch, Sheikh Saleh Abdullah Bin Humaid, Phyllis Curott and so many others stoked the inner fire of transformative action even in the midst of the most uncomfortable recognition of the various crises that are occurring simultaneously in our world.  The call to awaken was an urgent one.

In the principle of equality between all people regardless of religion, caste, age, or gender, daily, the Sikh community served Langar – a free lunch to over 6,000 people daily.  This prayer infused meal  - before they begin cooking, while cooking, before they begin serving, while serving and while cleaning up – was the most remarkable event of generosity and prayerful service.  As you entered, you were given a white cloth to put over your head out of respect.  As they guided people into rows where they sat facing one another, volunteers lovingly served an aromatic, vegetarian feast with hot Lentil Dahl, Chole Bhature, Saag paneer, Byryani, salad, fruit and hot naan bread in generous portions.

The infusion of prayer truly made this delectable feast even more delicious.  Sitting on the floor as a global community offered each participant a humble yet gracious way to connect and be fed body, mind and soul.  Everyone was welcomed. Everyone ate more than enough. The left over food was donated to the homeless daily and to food pantries.

In a sea of saffron, marmalade, tangerine, crimson, pristine white, black, brown, emerald, purple and multicolored robes along with American suits, blue jeans, t-shirts and tunics, every religious tradition mingled.  People swam in an Infinite Bliss of Unconditional Love and respect.  There was a World Lounge where white, vinyl couches surrounded by beautiful art allowed people to sit, connect, ask questions, be curious, be loving, listen and inquire about how we can be the positive solution to the pressing challenges that are happening in the world.  Imagine if we actually had such a lounge for people of the world to connect daily.   Maybe that is what Social Media is all about yet nothing can replace the eye to eye, heart to heart, soul to soul, authentic conversations and meeting new friends whose paths would have never crossed.

Every morning at 7am there were various celebrations/ceremonies of each tradition – from a Zorastrian Thanksgiving ritual where the fire is the actual incarnation of the creator, a Bhakti devotion by the Hare Krishnas, a Christian gospel service, an Indigenous Grandmother’s water blessing and singing to the four directions, a Zen meditation, or a Sri Chakra Yantra meditation where loved radiated out to the world, people participated in other faith rituals without fear of conversion or any aura of competition.  True understanding was present as 10,000 people weaved their days in the rich offerings of the Parliament.  People were connecting, curious, cooperating and respectful.

The historical, Women’s Plenary Chief inspired women to stand up globally to their inherent rights, to support each other around the world and to unleash Shakti – the deep, inherent, viable Divine Feminine life-force that is the primordial energy.   One speaker shared the quote, “They thought they buried us but they forgot that we are seeds.”  The call of, “don’t let anyone go hungry” that has been perpetuated by the myth of scarcity must be transmuted to that there is more than enough – Love, food, Life in alignment with each other. Together, we move this planet towards healing.

In the Healing Hearts at Wounded Knee presentation, Chief Arvol Lookinghorse, the 19th generation keeper of the White Buffalo Calf Pipe Bundle implored us to heal our Mother Earth, stop the fracking, heal the ancestral wounds and stand up for native rights.  We are at a tipping point and without a dramatic shift in our consumption habits he was warned by his grandmother that he could be the final pipe bundle carrier.  All of humanity shares this collective karma and we are being called to awaken to manifest and radiate Divine Love.  We must bear witness to the pain, return the dream to the children and connect to the holiest aspects of our lives as we heal into the state of Oneness.

Oprah Winfrey’s Network (OWN) “Belief” team screened the unprecedented, visually stunning interfaith series to a packed room  “illuminating the best of religions around the world.”  Inspired to weave a thread of love, vignettes of people’s lives reveal how people of all traditions walk through life’s joys, sorrows and challenges through their personal faith.

The feast of offerings were extensive and one could feel overwhelmed by the choices in the ¾ inch Parliament program yet people were guided by their intuition to workshops that were in alignment with their call to action.   As Stephen Dinan and Philip Hellmich of The Shift Network presented at the Vision 2050 workshop (a call to a global culture of peace), we must cultivate inner peace to establish international peacebuilding.  As we tap into the pulse of the world, our interconnectedness and creativity can support us in recognizing a bigger story that is emerging – one where we awaken as a whole, where compassion and forgiveness prevails and we create a new narrative of peace.  Each person at the conference is a piece of the puzzle for creating a world that works for everyone.

Some may think that the speakers and leaders were preaching to the choir. Yet, 10,000 seeds were pollinated and now grounded in the fertile soil of reclaiming the heart of humanity and serving in Global Peace.  It wasn’t just about signing declarations and creating commitments of change to bring back to our spiritual communities, it was a true call to action to work together for the greater good.  Our inner lives reflect in our outer world.  The Parliament’s Declaration and Commitment Book invites us to step into leadership – “I will do it. I will lead others to do it.”  Like the rainbow colored sands of the mandala, may we unite in the ONENESS that is LIFE to create a new narrative of Peace – one heart at a time.

For more information and to find the links to the archived videos, please go to http://www.parliamentofreligions.org

You are very welcome, Shelly. It was a life transforming experience. 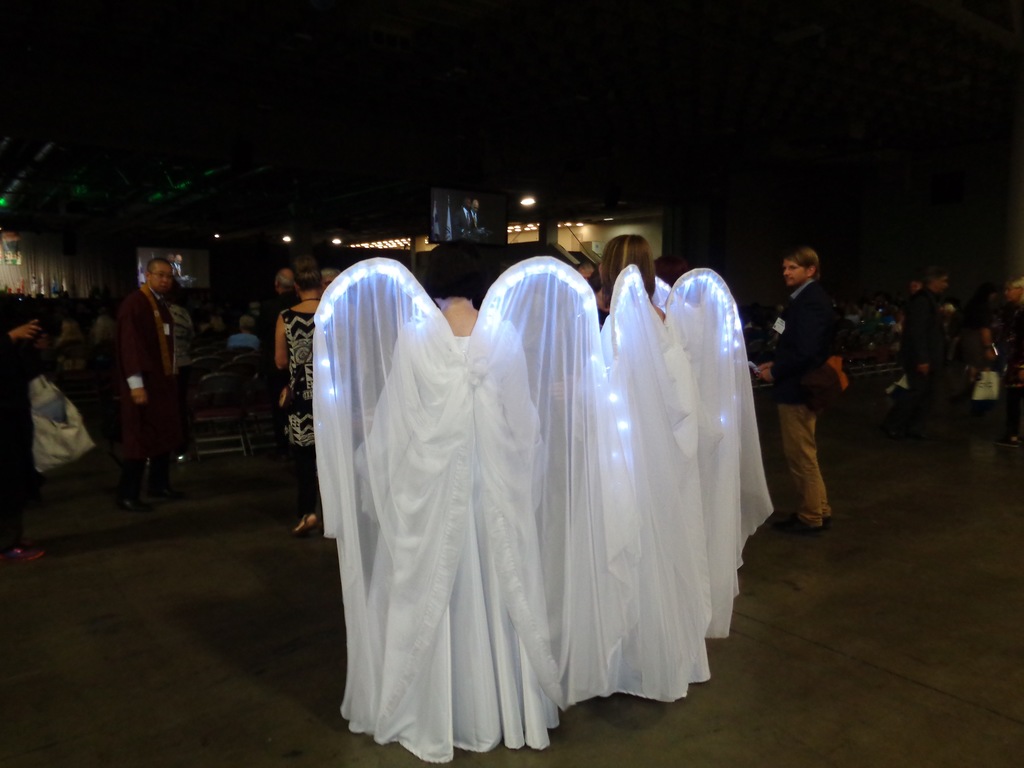 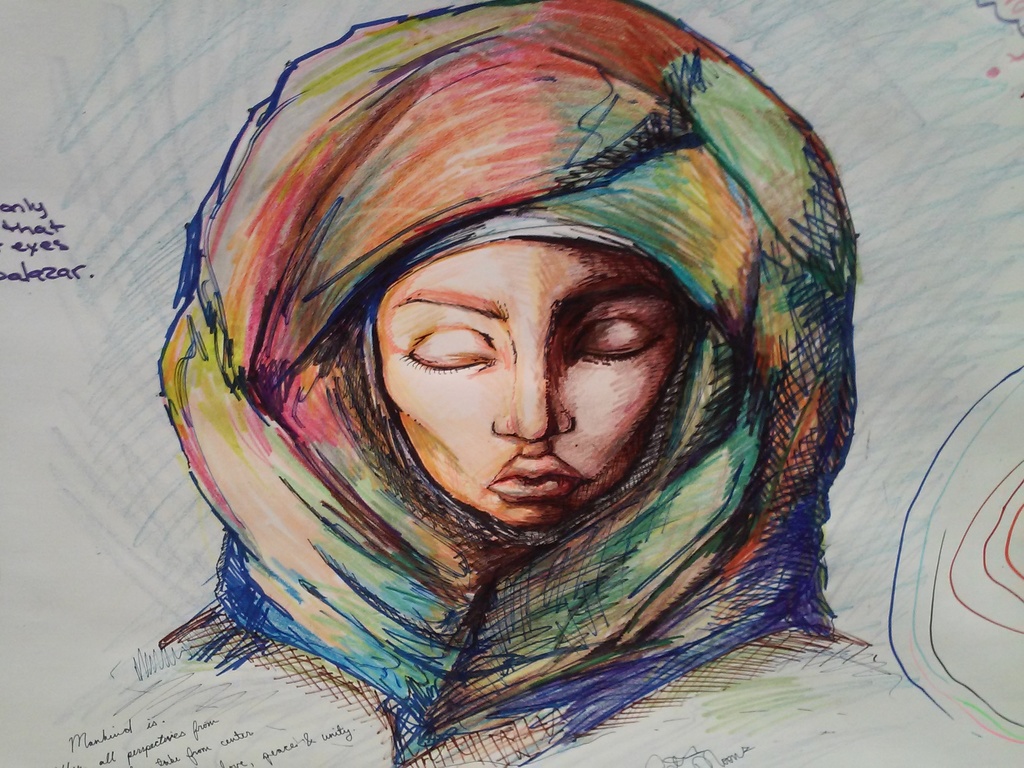 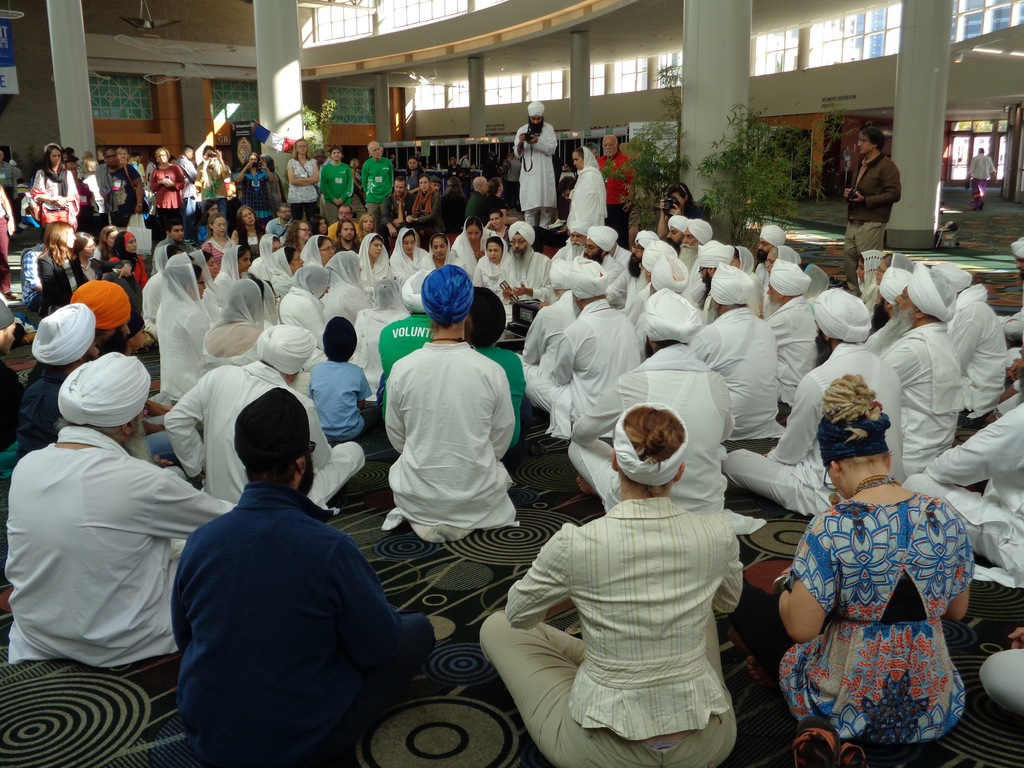