Abstract:   Explores how Spirit views us, how we are seen by the Divine.  Describes God’s love as it is expressed in the movie “Man of La Mancha” and shows how Don Quixote and Aldonza are archetypes …

Explores how Spirit views us, how we are seen by the Divine.  Describes God’s love as it is expressed in the movie “Man of La Mancha” and shows how Don Quixote and Aldonza are archetypes for the human soul and Divine Love.

Article
In 1974, the film “Man of La Mancha” was released, telling the story of the very nearsighted Don Quixote, who mistakes windmills for attacking giants and renames a local tavern slut, Aldonza, (played by the gorgeous Sophia Loren) his “Lady Dulcinea”.  Don Quixote’s theme song is “The Impossible Dream” and he sees the world through his own rose-colored (and slightly blind) glasses.  At first Aldonza goes along with his madness, but following her abduction and rape, she doesn’t want to play anymore.   In the song “Aldonza” she screams her frustration at not being seen for who she is.

It is easy to empathize with her rage.  Every woman has felt the insult of being perceived just as some man wants her to be, rather than who she really is.  Our sense of identity is strongly tied to outside validation – we need others to confirm our self-image. Aldonza fought hard all her life to find the power to claim herself, to make her way in a world that uses and abuses her.  She built up an impregnable wall of attitude.  And it worked!  Aldonza is self-sufficient, she chooses by whom and how she is used.  She has earned her independence. Aldonza learned to survive in a hostile world.  She cannot be hurt, because she doesn’t care what anyone else thinks.  Like many survivors, her anger is her armor.

Aldonza has a clear, unsentimental view of who and what she is.  She has no illusions, and few (or no) dreams.  When Quixote first appeared, he made her see a different possible life, and she was temporarily drawn in to thinking she could fit in his dream world. She momentarily tasted idealism.
Finally, though, Quixote’s “gentle insanity” offers only despair, and leaves her defenseless.  Those of us who are also survivors know just how deadly that is!  Therefore, we sat and nodded at her song, and wondered what is wrong with this old man who refuses to grant her the respect she deserves for her unlikely survival.  We joined in her fury and outrage, and remembered all the times our own reality has been denied, how often we were misjudged and overlooked.  And we sobbed with her. 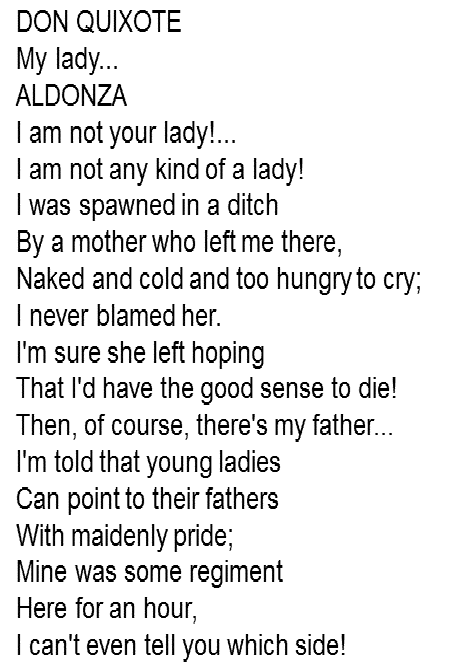 However, there is more to this projection than a man who decides who a woman “really” is.  Quixote is an archetype, as is Aldonza.  Aldonza is every human, the soul walking the earth learning to survive by any means possible. She is the unquenchable fire of life, the will to survive, the essence of the survivor.   Quixote is Idealism personified. He sees life as it should be, and chooses to live in his dreams of glory, of honor, of the Impossible Dream.  His reason for being is not merely survival, but ”to be willing to march into hell for a heavenly cause”. 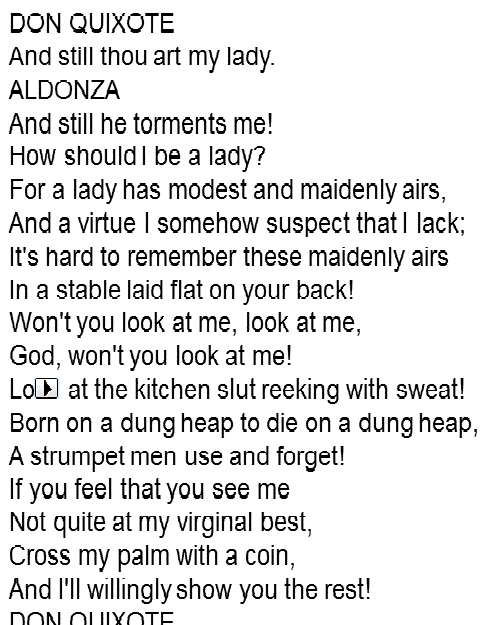 Quixote is the manifestation of Spirit, the Goddess, the Creator; and He sees Aldonza’s True Self – the Child created and loved by the Divine, who no amount of Earthly refuse can ever soil!  Aldonza wastes her time proclaiming she is “the most casual bride of the murdering scum of the earth” – because Spirit knows she is really “My Lady” – and He refuses to accept her self-loathing as valid.  He insists on seeing the innocent, beautiful, pure child who dwells in each of us. 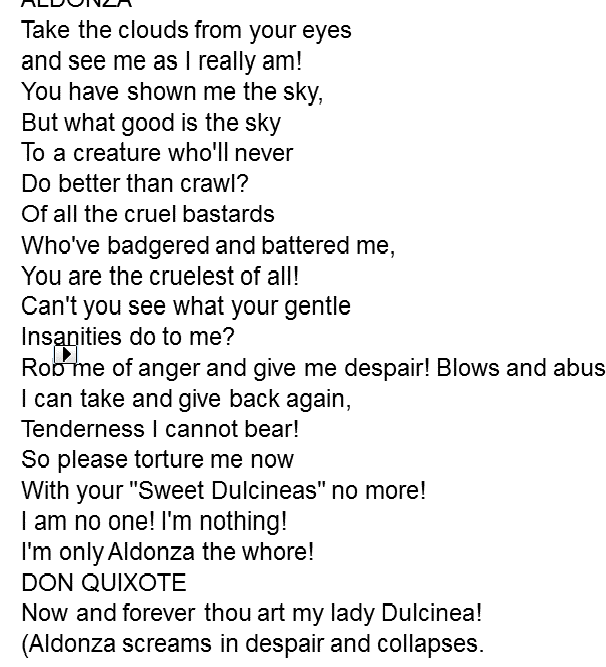 Spirit ignores “the kitchen slut reeking of sweat” and sees only and always Dulcinea – the noble lady who bears his standard, who doesn’t need to do anything to earn his undying devotion.  For each of us is Dulcinea, and Spirit will not be evaded – Spirit sets His Hound of Heaven on us, and will not stop until we surrender to His love.

In God’s Eye, each of us is the epitome of beauty, of grace, of noble bearing and the essence of Chivalry.  Our Soul is the prize that God demands, and pursues with irresistible tenacity.  There is nothing we can do to change His view of us, we will never convince Him that we are  ”no one, I’m nothing, I’m only Aldonza, the whore”.

That sense of being watched, that hot breath on our neck?  That is the Eye of God, always watching us; that is the breath of the Hound of Heaven, hot on our trail, determined to capture us and return us to the loving arms of God.

And with Aldonza, our only recourse is to scream in frustration. We might just as well give up – Be still - and let Spirit love us! 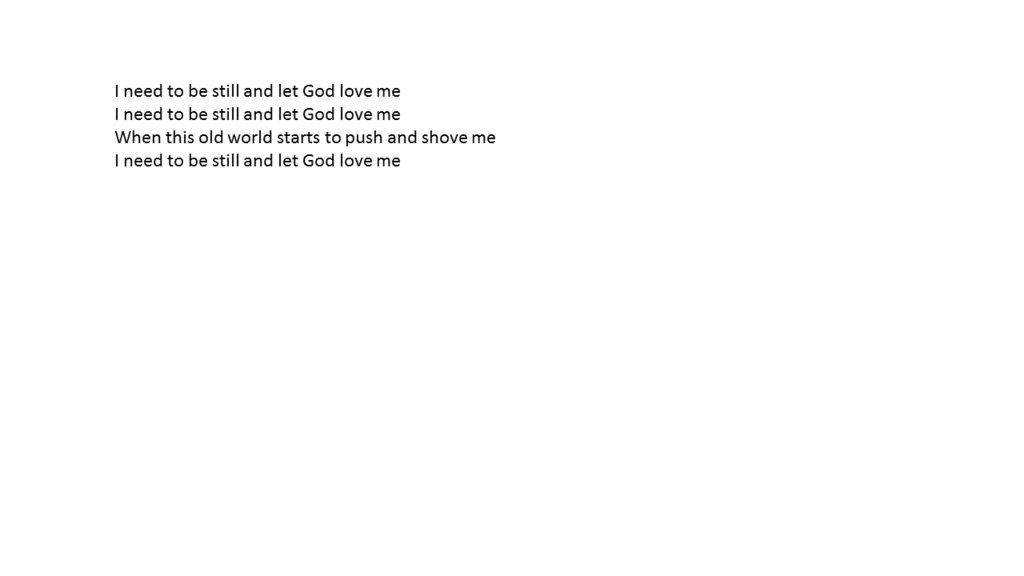 Author's Bio
Tess Pender is an ordained Interfaith Minister, active in 12-step programs for over thirty years.   Her spiritual practice began with Native American Sweat Lodges, and continued with a series of Vision Quests. She led a Teen Spiritual Education Program, and regularly teaches classes on accessing intuition.  She practices Earth-Centered Spirituality.  She can be reached on Facebook at https://www.facebook.com/Rev-Tess-Interfaith-Minister-1333335763419...

Hi, Tess. Thank you for your submission. I think you are on to something but it still needs tweaking and I'd be happy to work with you on this.  It needs a title.  I love the focus on archetypes and I would start with that.  I would use a couple of lines from "The Impossible Dream;" you mention it but it has some significant messages related to your purpose.  I would trim some of the other lyrics.  This way you can focus on the archetype and use Quixote and Duncinea as examples of what your are conveying rather than the center of the message.  What do you think?