"Breakfast at Epiphanies" by Zany Mystic 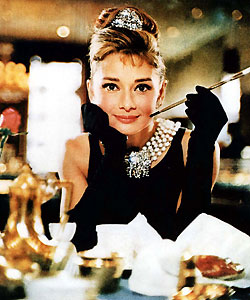 Images of the “Divine Goddess” are cropping up in my recent posts. There is a method to my madness. The Goddess is a mysterious Feminine Archetype, whose facets have been explored by some of the great leading ladies. The innocent and naïve charm of Audrey Hepburn, exploring the boundaries of “true love”, the conniving and heartless Queen of Lust - and of Pepsi, Miss Crawford, and the Many Faces of Eve, Bette Davis. This is a time when the dominant rule of distorted male patriarchical societies is ending; a creation of the “old paradigm”. The NEW paradigm will be temporarily overshadowed, or over lighted, by the Divine Feminine, who now voyages to take her rightful place in the pantheon of Gods and Goddesses in “All That Is”. A new vision is sharpening on the holographic movie screens of my world, regarding the many shifts we’re currently experiencing which accelerate exponentially until around 2012. The precise timing is personal, so none can make generalizations. Tune into your inner clock radios for guidance and details. I find the HF (High Frequency) stations most enjoyable!

It’s only natural to wonder what possible experiences may be on the horizon, since so many of us are researching, awakening and hearing different versions. All versions are accurate according to their creators. Never mind that each “creator” is but a small puzzle piece, viewing the cosmos through one set of glasses or spectacles. This is related to the “gifts” and soul arrangements prior to incarnating for the “big events”. Some have an uncanny ability to synergize numerous “world views” and weave a more vast and interesting tale. A few examples are Michael Tsarion, Darryl Anka and Daniel Jacob. There are thousands of others in this cosmic cast of characters, so trust those you are drawn to, since all spokes in the hub lead to the center. There is literally “no time” to convince anyone else of having the “right way”. And what’s the point of always being a know it all, who mistakenly imagines from an egoic perspective, that they are “the Chosen One” and only their way is the right way? How old paradigm! Literally everyone is chosen, as we choose our Selves.

What is the awakening process morphing into?

I’m seeing a dual image: that of an RKO Electric Radio Tower and yellow tulips. Those who are involved actively with their own awakening, pushing the “pedal to the metal”, are accelerating at a faster pace. Yet, we are all subject to the spiraling energies which are swirling around now so rapidly that it’s indeed dizzying! Some may find themselves having numerous epiphanies, synchronicities and enlightened moments, only to return to “Abby Normal” for brief respites into mundanity, bordering on insanity. We are the Beacons of Light, wired to channel lightning bolts of energy in all directions. Most of us are more akin to flowers in a field; bright yellow tulips come to mind, whose gentle swaying kisses embrace the solar logos. Their lives may be shorter, but are nonetheless spectacular. Since we are all eternal and infinite beings of light, no one actually “lives longer” than anyone else. The appearance of death is an illusion, in which we remove our bio-body suit and walk through another door into spectacular beauty beyond description. The imaginary “hell” zealots speak of is right here, right now. If you don’t believe it, just look around with open eyes. There is no further down the ladder we can go. This is it.

There will be 3-fold manifestation from the noosphere, the field, the zero point. It can be referred to as the “higher realms, densities, dimensions”, for those who think hierarchically. The mystically inclined might prefer “the other side”. Or, make up a new name; the field of consciousness in which we swim, fishes in the sea. The basic elements are all manifestations of “divine consciousness”, which manifests as “genius” in all walks of life. Einstein and Tesla are two examples of tapping into this “field of God” and returning with many lifetimes of solutions. A “psychic prong” will be showing up, bringing more who are able to “see”, channel and commune telepathically. Though channeling gradually becomes common, it will begin to fade as the rest of us “get the message” and our frequencies rise. There will be openings of the Heart which may manifest in a variety of inspirational forms, such as the artwork of Akiane. Some kids coming in bring a broad array or palette of colors with which to paint a life of beauty and inspiration. We will all experience a “mixed bag” of these elements, as all the “Rays of Creation” begin to manifest in harmony, by aligning with our authentic selves.

In rising up to meet the higher realms, the efforts made to complete our own inner revolution begin to draw from the divine blueprint, and we are infused with spirit which is sometimes referred to as “divine intervention”. It is the breath of God, literally breathing life into itself, its own creation, which is us, which is It. True Mirrors; not smoke and mirrors! There can be no separation or distance, and the imaginary distance we’ve felt for hundreds of years, through duality, fragmentation and polarization, is soon to be dropped like a discarded toy. Who wouldn’t want to literally glow with lifeforce illuminated from within, radiating beauty? It saves a trip to the cosmetic surgeon, to be sure, so surgeons many not approve of this “new energy revolt”. In fact, any who are presently at the “top of the pyramid” are going to find they have gone for the booby prize. They will have the most difficult time “adjusting” to the higher frequencies of love, compassion and interconnectedness of all within a loving Creation. I’ll leave the details of how you perceive this to you, since it’s a very personal creation and source of continuous revelations.

Ultimately, we are all experiencing the higher consciousness “fields”, and this may begin to reveal itself through various forms of humor and wit. Those who are more aware will be like members of an inside club, who are the insiders who “know the joke”. We will be laughing privately at the tomfoolery and naked obviousness of those who consider themselves “important people”. They have the furthest to fall, having placed themselves on their own pedestals, they are literally hoisting themselves up on their own petards! The juicy part is that rather than experiencing the “doom and gloom syndrome” that most must pass through, we will be laughing privately at the ridiculous foibles of an antediluvian mindset, which in its psychopathology imagines itself to be our gods, and we their slaves. Imagine that! Well, don’t, because it’s simply no longer the case. True, many still carry the yoke of enslavement, but by the end of this year, 2009, it’s conceivable that events will appear to conspire to collapse the old paradigms, so that the new may be birthed for all. It’s a precise process, timed to the nanosecond from higher realms, but here on this side it feels like chaos, moving at a snail’s pace towards some unknown future. Trust, relax and let go. All worries will pass away and there is literally nowhere to go, nowhere to hide, and everywhere to be happy. The first and last point is to BE YOURSELF!

There is a distorted shell called false personality, which is our interface with others, and it has been created artificially through life’s distortions. This is not real, and will fall away. What’s left is an “essence” within, which is developed until a small child, then is usually stuffed down and trampled on, or locked in a closet due to fear, non-acceptance, judgment, etc. This is our authentic Self. It comes in with numerous wonderful skill sets, from many other lives being lived simultaneously. Because it is gentle, delicate and easily harmed, it learns to hide early on. Some have destroyed their essence, and have crystallized in the false creation of personality, which appears to be quite authoritative, knowledgeable and superior. Others of us are in touch with the “inner child”, and must re-learn how to interface with the “outside world”. To do this requires the intentional creation of a “true personality”. This is not a distorted construct, but an intentional conscious creation of spirit, to protect and nurture the essence or child within. There is a cosmic team of advisors, guides and loving souls to help us every step of the way every day, from the illusions of birth and death. Living authentically in abundance requires aligning with our authentic Selves, stripping away that which is distorted and false, meaning “not real”.

It can take many years, for those of us who began early, to go through the “initiation by fire”. The ultimate fire approaches, but we have many “minor blazes” which help us along the way to strip the illusions off our reality. The true personality learns how to be authentic, without lying, manipulating or distorting. It seeks only to be authentic, and in that process discovers a beating heart, connected to other beating hearts. This is the “epiphany” which those who would control will miss: there cannot be empathy, heart, conscience in a dead essence. The false must be melted down and returned to purity. We are not concerned with how that process works right now, but we will be seeing it occur daily in one “meltdown” after another. The higher up we travel within, the more elegant and subtle the humor. We are in a cosmic joke, and those who are most serious are going to be the last ones to “get it”. But, “get it” they will. None can escape this transitional period into vast, new realms never before experienced. We are truly the Wayshowers for each other and for many other advanced civilizations. We are doing something quite unexpected and seemingly impossible. We are creating a bridge from Gaia to Heaven and back, and there will be no shortage of loving souls to “show the way” as the times become more intense. We will walk the Rainbow Bridge together, hand in hand, into the purity of illumination and a loving radiance which enfolds us all. Remember to laugh along the way. Seriousness is a fatal illness!

See you at breakfast!
Zany Mystic

Would you like to have a column here?
I will feauture this on the next mag!
Namaste,
Liane