Congestion is a common challenge during the cold and flu season, here are a foods that can help to clear up congestion and make breathing easier. These healing foods work much better than over the counter drugs for congestion (which all have side effects)… and they are much less expensive. 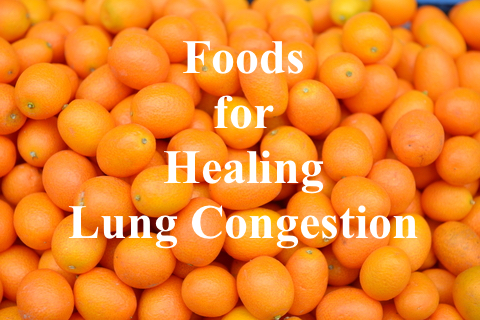 Spicy Food - Just about any kind of hot pepper helps with inflammation and helps with getting rid of mucus. Perhaps some spicy soup will do the trick… and adding some cayenne pepper to any food will help clear up congestion.

Watercress - Watercress is another great food that is full of antioxidants that help to get rid of chest congestion. Having a watercress salad, or drinking watercress juice can make all the difference when it comes to breathing easy.

Black Coffee - Coffee is not a food but it contains theophyllin which helps to open up airways thus allowing a person to breathe easier. A little black coffee can help in amazing ways.

Parsley - Parsley contains anti-histamine agents which help to break up congestion and mucus. Thus adding parsley to soups, salads, stews, and any other food can help with congestion.

Onions - Onions contain sulfur and powerful antioxidants such as quercetin which help to break down mucus. Eating 1/3 of an organic onion either raw or cooked helps a person sleep much better at night by clearing up mucus.

Celery - Celery is full of powerful anti-inflammatory agents that help to break down mucus so we can sleep. Eating 3 or 4 large organic celery sticks at night or drinking 8 oz of organic celery juice just before bed will open up airways.

Garlic - Garlic is a powerful anti-inflammatory agent that when eaten raw works wonders to open up airways and get rid of mucus. Eating one or two cloves of fresh organic garlic daily helps with congestion.

Ginger - Ginger is a great anti-inflammatory agent with lots of antioxidants that helps to clear up chest congestion. Having ginger tea, or ginger and pumpkin soup is great for opening up the chest.

Radishes - Radishes are powerful medicine for opening up the lungs and getting rid of mucus. Adding some red radishes to a nice green salad helps with congestion.

Limes - Limes juice helps with mucus, also lime leaves made into a tea with fresh ginger is very good for breaking down lung congestion and opening up the lungs.

Fennel - Fresh fennel is great for getting rid of mucus. Eating a 1/2 cup of fennel will break down mucus and open up the lungs. Or drinking a tea made of two teaspoons of fennel seeds in a cup of hot water steeped for 10 minutes will also help.

Bamboo Shoots - Bamboo shoots in Traditional Chinese Medicine help to clear up mucus and open the lungs. Cooked with a little bit of ginger bamboo shoots work well for getting rid of thick yellow mucus.

Pineapple - Pineapple contains bromelain which is a good anti-inflammatory agent which also helps to get rid of mucus.

Wasabi - Wasabi and other types of roots like horseradish open up the lungs and get rid of congestion.

Agar - Agar is a gelatin like medium that’s made from seaweed which helps to moisten mucus membranes and get rid of thick yellow mucus. Agar powder can be found at most health food stores.

Pumpkin - Pumpkin is full of lots of great antioxidants and anti-inflammatory agents that help to get rid of mucus. Grating up a piece of fresh pumpkin or winter squash and having it on a salad works wonders for opening up the chest.

Leafy Green Veggies - All leafy green veggies are very important because they contain powerful antioxidants and live enzymes that help to break down mucus and open up the lungs so we can breathe deep. Hot food are great but having a salad is also important for lung congestion. Studies at Cedars-Sinai Hospital show that green veggies decrease swelling of our airways so we can breathe easier.

Berries - Berries in general contain lots of antioxidants that help to boost up our immune system and thus help to get rid of mucus and open our lungs.

Kumquats - Kumquats are little orange like citrus fruits that open up the lungs and help with congestion. And they can also be boiled with ginger and made into a nice tea for getting rid of congestion.

Pears - Pears and pear juice are used in Traditional Chinese Medicine to get rid of mucus, and open up airways. Pears works to dissolve away green or yellow mucus thus allowing a person to breathe deep.

Thank You Shelly - Many Blessings to You - Dr. Haider

The Spiritual Law of Engaging In Relationship , No One Talks About

My First Teacher and Practices

8 Signs You Are Ready to Become a Professional Tarot Reader