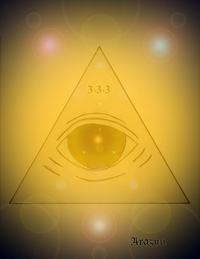 In the above image is the symbol that many connect to the Illuminati (dark forces) " The all seeing eye of God". In this case with the 3.3.3 above it I sense that this is a foretelling of the completion, finalization of such energies. This symbol is very powerful and has been manipulated into
having a negative context. We will now be a world of balance, no more good vs evil or light vs dark. On December 21st there is also going to be a total lunar eclipse, curious as we will be in darkness but the light still shines, a blending ....ONE.

I had not realized about the lunar eclipse, until I did a search about the full moon for December. I returned to my notes and there it was, I had doodled sun rays around the solid circular date of the 21st. This was a subconscious recognition of the lunar eclipse. 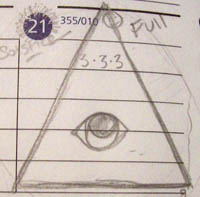 It was also interesting that as this image for 3.3.3. evolved the colours of the three fold flame appeared in a second triangular formation. I sensed that the blue, pink and gold lights/flames that
formed the second triangle, were moving down to in fact make a merkaba. This would represent the completion of energies activating our light bodies.

One of the other words I had noted in my doodling was "gateway". I sense that this gateway is of great importance, as through it will come huge energies. These energies will be of knowledge and understanding, revelations of that is. The final veil pulled back to access the universal understanding. I sense there will be many coming to assist us, many riding on this wave as it floods to Earth, teachers to nurture the children of Earth, us! There many upon this planet that have come before, this will be the moment that they will step forward and reveal their true selves.

The attunement, healing and activation image for this month also seems to contain an eye. It is as if we are being closely watched over as these new energies integrate into our beings. 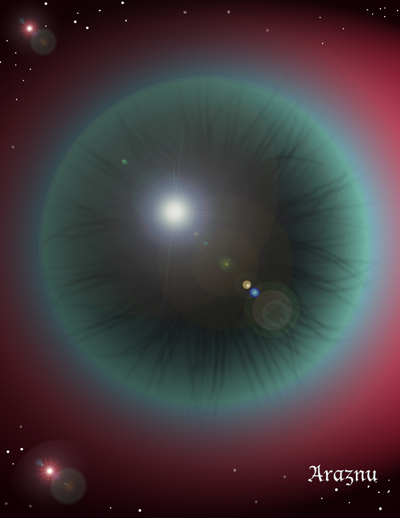 These are truly wondrous times that we are living in, as we forge forth to ascend our physical bodies. Those who are awake and aware can see the messages that are being put before us.

In October of 2008 my husband and I witnessed the following, this amazing cloud formation
was above our home. I sense that this foretells of the incoming energies before us. This next section is from my journal.

Have you ever had a experience when the hairs on your neck have stood on end? Well this is what happened to me when I saw this cloud formation in the sky. I was so in awe of what I was viewing, I called out to my husband to bring his video camera. I knew that in taking just photos that some may say that the picture was manipulated, so video footage it was. I even walked in front of the camera to show it was real. The energy in the air that afternoon was electric, I knew I was seeing something special, the angels are watching over us. 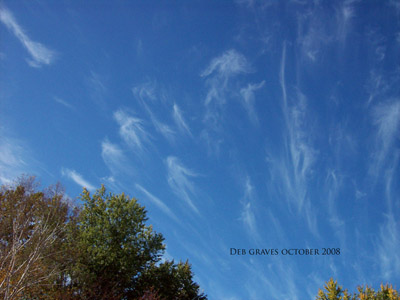 It was not until later viewing the image on my computer that I noticed the face in the middle of the photo. I showed my husband but he said he could not see what I could. I decided to do a search on Google and see if I could an image that I could use to bring out what I saw. I found an image of Jesus which looked like it would fit, fit it did, it was perfect. I superimposed the image on a second copy and then sat them side by side. It was then that I noticed the letter "S" made from clouds on the top right of the image, I let out a surprised Sananda !!

Oh my, this was so much more than I had first realized. 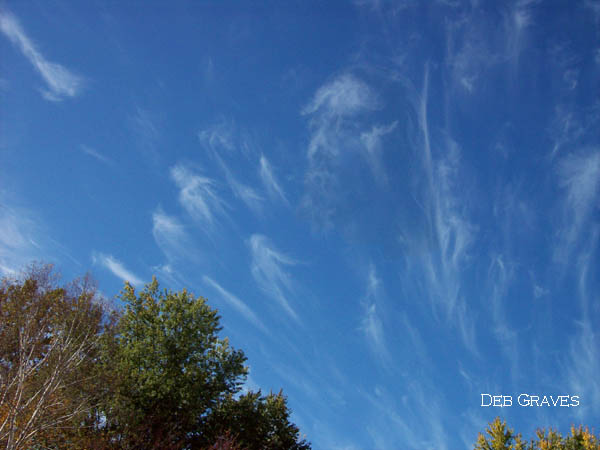 I can see so much more within this picture, but I will leave you to see what you can find.