Interdimensional Being: Where Do You Consciously Reside?

Did you know that you are an interdimensional being?  You not only reside in the first, second, and third dimensions…keep going...you exist in the fourth, fifth, sixth, seventh…and then things get interesting as we move into the higher dimensions, to where our Higher Consciousness resides.

In the third dimension, past/future, cause/effect, etc., give rise to the appearance of separation.  Opposites are a perception derived primarily from the left hemisphere of your brain that allows the “you” to declare “I am.”  Your limited perception, garnered through your senses, strengthens your belief that you are a separate being from the energy system surrounding you—Separation Consciousness. 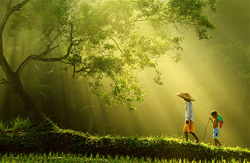 The fourth dimension is where we see the illusion of separation begin to merge again as space and time become spacetime.

The fifth dimension is where we see Consciousness expand from Separation Consciousness back toward Unity Consciousness.  While still in the physical body, time and even space get a little fuzzy as we are no longer bound by their limitations, but begin to notice time and space give way to what third dimension dwellers call, miracles.

Transcending apparent limitations is not really miraculous to the seasoned fifth dimension dweller, or rather, she/he would say there is nothing that is not miraculous, including the realization of whom you are—a Co-Creator, equal in every way to the rest of Creation/God!

If you aren’t sure where you consciously reside, here are few pointers that may help you locate yourself on your mind/body/spirit journey.  If you are a living testament of the following precepts, in other words, it has moved from head to heart knowledge, then your Consciousness has expanded beyond the third dimension and into the fifth.

If you are still trying to ward off negative energy, chant mantras and affirmations, find your twin flame, or repair your chi, this is representative of conditional love found in the third dimension—the dimension of “effort.”  Don’t worry, we all did it and it was perfect!

Participating in these activities is a demonstration of your desire to transcend, and you will.  One day, you will wake up and you will simply realize yourself to be what you have been seeking; the rituals no longer necessary.

You can’t make a mistake and never have.  Take each day as it IS, allowing whatever shows up to BE.  And so it is.  Namaste.

NOMINATED FOR THE 2014 DAYTON LITERARY PEACE PRIZE — Founder of What Would Love Do Int'l, media arm, In the Garden Publishing and educational arm, Bodhi UniversiTree, Christine Horner is dedicated to the advancement of human consciousness and awakening the miraculous in you. Christine is the author of the acclaimed and ground-breaking WHAT IS GOD? ROLLING BACK THE VEIL, merging science and spirituality.  www.ChristineHorner.com, www.Facebook.com/hornerchristine, www.Twitter.com/itgpublishing

Awesome, Trevor!  Thank you and have a wonderful weekend!

The Guru – Live in Your Living Room!

Can Quality of Life Influence Longevity?

Memento Mori – On Facing Our Own Mortality

Break Through the Limits of the Brain