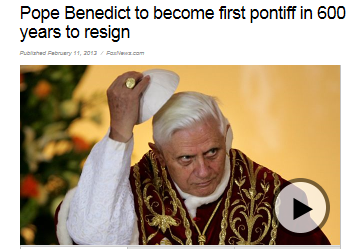 Today I am honored to present Peter Canova as a guest blogger with his article POPE ANNALISA AND WORLD EVENTS.

Pope Annalisa predicted a number of geo-political events years prior to their occurring. The latest similarity is the abdication of Pope Benedict for stroke and heart related illness. Compare the news headlines below to specific passages from the novel concerning the fictional Pope Clement, all written many years before current events.

In a sudden announcement that caught Catholics around the world off guard, Pope Benedict XVI said he will resign at the end of February, becoming the first pontiff to step down in nearly 600 years.

The 85-year-old pontiff made the announcement Monday, saying he no longer had the strength to carry out his papal duties.

In 1991, Ratzinger suffered a stroke, according to reports. After becoming pope, Benedict, who predicted a short tenure for himself, suffered another stroke in May 2005, according to the Vatican. He is also believed to suffer from a heart condition.

For the sake of the Church, His Holiness must step down and allow for election of a new pope,” Heinrich Cardinal Mannheim declared. His words would trigger a historic confrontation and they echoed off the room’s ornately painted ceiling and gilded walls. No pope had abdicated in six hundred years,and no one had forced an abdication in a thousand. Mannheim’s cold, pale eyes fixed on Pope Clement for his response.

“The pope has suffered a severe stroke,” the doctor told them.

“Eminences, please listen. As you know, we received word the Holy Father has been felled by a stroke.”

Thus, the Church officially acknowledged the death of Clement, fifteenth in the two-thousand-year-old line of popes to bear that name. Dr. Solari claimed the apparent cause of death was a massive heart attack.

story line of a Second Gulf War in Iraq against the heirs of Saddam Hussein over WMD's (remember Ouday and Qusay?).

When that war actually happened two years later, prior to publication I changed the story line to an Iran gone nuclear and threatening Mid-East stability. We learned half a decade later, this is exactly what has happened.

In the book, the fictional Pope Clement, who has a heart ailment, is being pressured to become the first pope in 600 years to abdicate and then suddenly dies from a heart attack.

It will be interesting to see if the next pope is from the Third World . . . stay tuned.I really think the author tapped into some major currents in Pope Annalisa. For one thing, he caught the whole idea of Mary Magdalene as the representative archetype for a resurgent feminine consciousness. I don’t mean feminism, but rather our collective evolution toward using our intuitive and imaginative faculties as a gateway to wider segments of humanity having personal encounters with higher dimensions and consciousness.

This very phenomena has recently been tagged by many as the heart of the Quantum Consciousness Paradigm Shift in 2012. In fact, Peter, who is a Patheos columnist, has a multi-part column devoted to how he developed many of these themes starting at the turn of the new millennium. http://www.patheos.com/Spirituality/What-Does-2012-Peter-Canova-07-...

I know from the author that the first manuscript drafts of Pope Annalisa completed in 2000-2001 had a story line of a Second Gulf War in Iraq against the heirs of Saddam Hussein over WMD's (remember Ouday and Qusay? Who can forget them!).

When that war actually happened two years later, prior to publication he changed the story line to an Iran gone nuclear and threatening Mid-East stability. We learned half a decade later, this is exactly what has happened.

Then there is the startling issue of the pope in his blog on my column as you’ve seen.

The novel Pope Annalisa was a revelation that has become a reflection of current events both on a spiritual and political level during  prevailing times such as these.

Hi Dawn, so glad you liked the article. I love having guest bloggers and have been a guest on many other blogs.  I did as you asked and hope you enjoy the finished product. I am leaving for Vancover tomorrow morning for a conference and will be gone and unavailae by email or phone for 5 days. I'll check my emails as soon as I get back.

Meditation Beyond the Om: 8 Non-Traditional Ways to Clear Your Mind

The Importance of Letting Go

6 Steps of Engaging with a Soul Connection