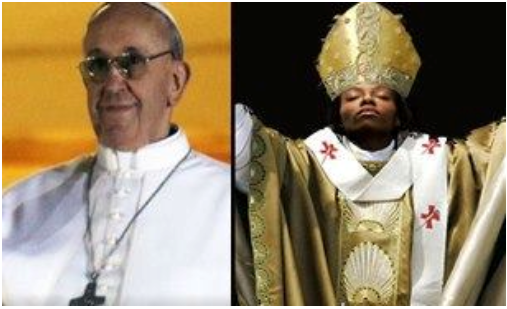 Shakespeare once said, “All the world's a stage, And all the men and women merely players; They have their exits and their entrances, And one man in his time plays many parts…”  The newly appointed Pope Francis certain fits the play-bill of this wise quote.

With the appointment of a third-world pope to the Catholic Church, the world stage is beginning to look like reality mimicking art, rather than art mimicking reality, as seen in the award winning novel, Pope Annalisa by author Peter Canova.

Peter Canova has been my guest blogger twice before as he wrote about the current events unfolding in Rome and how they are reflected in his novel.

I am pleased to share Part III of Peter Canova’s guest blog concerning this ever unfolding and eminently entertaining saga on the most powerful religious stage in the world- The Catholic Church.

Please check back often because this life-script seems to be written and rewritten daily. Who knows what tomorrow will hold.

As I said in a post on my Facebook pages (Peter Canova and Pope Annalisa) a couple of weeks ago, we would likely have a new, non-European pope from the Third World or an Emerging World Nation as they are now called. This has happened with the election of the Argentinian, Pope Francis.

Now that we have learned the identity of the new pope, we can examine how this world event compares to the events written in the novel Pope Annalisa about the Church and the papacy.

But first we must understand one thing about prophecy and premonition. Prophecies are sometimes literal occurrences, but far more often they are predictions of events told in symbolic terms. For instance, we all knew the Church could not elect a female pope with no females presently in the clergy. But anyone who read the book realizes that the female pope, Annalisa, was symbolic of an end to the Catholic Church as it has been, and the commencement of a renewed direction, one more in keeping with the characteristics of early pre-Roman Christianity.

Before we look at specifics, let’s compare some characteristics of the new pope to Annalisa. Both were the first to be elected in modern times as non-Europeans from emerging countries. Both adopted a name not used by other popes in two thousand years. Both were portrayed as humble, living in small apartments outside the Vatican and walking or using public transportation to go to work.

Both have a specific focus on the poor. Both represent the progressive wing of the Church (Francis is a Jesuit) elected mysteriously by a college of cardinals stacked with conservatives who are normally at odds with such elements. Both were noted for modernizing the Church in the face of conservative opposition. Both have people hearkening back to earlier, simpler, more spiritual forms of Christianity. Both were credited for modernizing the Church.

Now hear some of the quotes from ABC television newscasts immediately after the announcement and compare them to specific passages from Pope Annalisa. Then you be the judge of how closely the events match.

“. . . the Church is treading water, caught between a rock and a hard place," she replied. ". They're afraid of weakening the central authority of the Church and the pope in these uncertain times."

[Annalisa] could advance or destroy the hopes of all Third World peoples to secure a place of respect in the eyes of the world and in the depths of their own hearts. “They put much on her, Pietro.”

People were pinning their hopes and dreams of deliverance from this troubled world on that small figure engulfed in white light. Tonight’s joy could become a great weight; did Annalisa realize that?

“The pope faces the challenge of relevancy and bringing the church into the 21st century.”

Pushed and criticized, [the previous pope] would not go down in history as the pope who surrendered to the new world. It was safer to stand by a two thousand year old tradition than to reform it, even if that meant sacrificing relevancy in the modern age.

“The Church is already being abandoned by the poor who see it as part of their problem, not their hope; the affluent educated see it as hypocritical and irrelevant in the modern world ... the people need some sign of change to have hope things will be different."

Once the greatest institution in the West, the Church was already in a serious, steady decline. Churches were closing for lack of priests and parishioners, droves of young Catholics were drifting away.

ABC commentary on the first non-European pope from a Third World country:

“The first non-European pope in modern times from an emerging continent . . .”

Pope Annalisa as the first non-European pope from a Third World country :

Some Third World cardinals defected from Mannheim. In Annalisa, they saw an exceptional person from their own ranks who might balance the scales of the Church and accomplish a dream of equality they longed to fulfill.

“She [Annalisa] could advance or destroy the hopes of all Third World peoples to secure a place of respect in the eyes of the world and in the depths of their own hearts. . . .”

“The prophecies say the Great Heretic will destroy the Church this very decade,” LoPresti replied. “He, or she, will arise from the Third World . . .”

ABC commentary on papal commitment to the Third World and the poor:

“[Pope Francis’] commitment to the poor of Latin America and Africa could turn a corner for the church . . .”

Pope Annalisa on papal commitment to the Third World and the poor:

[Annalisa’s proposal for the poor] --“A community that shares its wealth and labor to support its members did characterize the ancient Church. Drawing from that example, we might strive for a system, a kind of volunteer corps staffed by skilled and spiritually motivated people, where the Churches would invest in selected Third World areas to start communal industries. The people of those communities can be trained as employees, but they would also own the businesses. As these industries became profitable, they would repay the loans to the Church to create a revolving investment fund.”

ABC commentary on a return to earlier Christian practices:

“[Pope Francis’] practices represent a return to the ways of earlier Christianity . . .”

Pope Annalisa on a return to earlier Christian practices:

“Today I would like to take you back two thousand years to recreate the experience of the early Christians. When they gathered in those days, their meetings were a little different from our services today." The Pope stood and walked down the aisle to be closer to the audience. She continued speaking as she strolled among them. “They would speak of their lives, you see, and they would try to apply spiritual solutions to their problems. It took faith, trust and courage for these early Christians to speak in public of their problems, their failures, their shortcomings.”

[Annalisa’s proposal for the poor] --“A community that shares its wealth and labor to support its members did characterize the ancient Church. Drawing from that example, we might strive for a system, a kind of volunteer corps staffed by skilled and spiritually motivated people, where the Churches would invest in selected Third World areas . . .”

It has been said that life is stranger than fiction. Perhaps the saying should be, “it is only a matter of time before life catches up with fiction and makes strange seem normal.” Are we there yet?