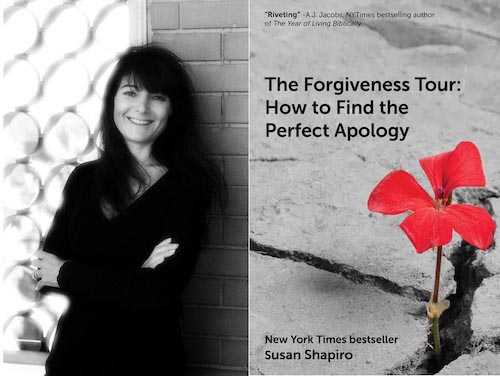 It’s been a tough year for New Yorkers. Deserted streets and social isolation don’t come naturally to the city that never sleeps. For some, the world turned upside down. Some relationships mended while others ended.  Now that the City is reopening, New School professor Susan Shapiro is on a forgiving binge.  Her acclaimed new memoir The Forgiveness Tour documents her journey to find out how to forgive after suffering a deep betrayal.  Catching up with my former teacher on Zoom, Shapiro reflected on the opportunities the pandemic gives us to reinvent ourselves and our social worlds.

McCarthy: Why is everyone talking about forgiveness now?

Shapiro: The global medical crisis changed everything. People have died, suffered illness, lost jobs, housing and security.  Weirdly, it might be the perfect time for reflection and reconciliation. After traumas, my therapist would ask me: “What did this teach you?” Deciding who you want or don’t want in your life is a good step toward getting healthier.

McCarthy: You had a falling out with your long-term Greenwich Village therapist, an important mentor in your life for 15 years.  His refusal to apologize prompted your journey.  As a journalist, did you intentionally interview leaders from different religions?

Shapiro: Not at the start. I stumbled into the spiritual component when I was teaching a workshop at Holy Apostles soup kitchen in Chelsea with this fantastic Reverend, Elizabeth Maxwell. She explained the Christian attitude about forgiveness, where Jesus says, “Father, forgive them, they know not what they do.”  I researched Jewish and Muslim theories for forgiving which were less blanket; they required the sinner to repent. In fact a Hasidic student told me that a Jew is required to ask forgiveness three times. If the injured party doesn't forgive, the sinner is forgiven, but the person who didn't forgive has to ask forgiveness for not forgiving.

McCarthy: Which attitude helped you the most?

Dr. Vatsal Thakkar’s Hinduistic overview was illuminating. He felt there was something about my mentor’s situation that I couldn’t see and offered a metaphor: “A commuter was angry that a woman stopped her SUV abruptly on the highway to get something in the back seat, almost causing an accident. What the commuter couldn’t see was that her infant was choking.”  That turned out to be prophetic.  I later learned that my mentor had been going through family difficulties I didn’t know about.

McCarthy: So you learned to forgive him without getting an apology? Do you recommend that?

Shapiro: Well, Alison Singh Gee, an Asian American colleague in L.A. shared a saying by Confucius: “Forget injuries, never forget kindnesses.” That was helpful since my mentor had been kind for 15 years. He’d helped me quit smoking and drinking,  marry a great guy, publish books and improve my career. I focused on my gratitude. My Michigan Rabbi Joseph Krakow, who does hospice work, asks those departing to say a prayer: “You are forgiven, I forgive you. I'm sorry, I love you.” He says those words can really help relatives grieve, even though it's not  specific, and that’s it’s never too late to issue a heartfelt apology and heal. I actually wrote a piece about ways to forgive without an apology for the Daily News in February.

McCarthy: You interviewed your former student Kenan Trebincevic, a Bosnian Muslim physical therapist now in Manhattan. He never forgave the Christian Orthodox Serbs who killed his people during the Balkan war. Yet by helping him publish books (“The Bosnia List” and “World In Between”) he became a spokesperson against hate and Islamophobia and empowered himself.

Shapiro: Yes, we call our collaborations  “Jewish/Muslim books of healing,” which we could all use right now. There’s a line from a Bosnian poem I love: “Wounded I am more awake.” I tell my students at The New School, NYU and Columbia that writing is a way to turn your worst experiences into the most beautiful and empowering.  I also share my therapists’ creed to “Lead the least secretive life you can.”

McCarthy:  It took you ten years to finish and publish this book which a starred Publishers Weekly review called “magnificent.” Why so long?

Shapiro: Therapy saved my life so I didn’t want to write a memoir that would denigrate it any way. It took a while to gather enough wisdom so the book would do good in the world.

McCarthy:  Did reconciling with your mentor – who eventually did apologize - make you a more forgiving person?

Shapiro: In the book I share four elements of a good apology – acknowledging what you did and explaining why it happened, saying you’re sorry, showing you’ll never do it again, and offering reparations. I’d say I apologize more fully now when I’ve hurt someone. And there’s a very happy ending which underscores the benefits of forgiving.

McCarthy:  What advice can you offer New Yorkers coming out of a horrible  year of isolation?

Shapiro: This is a good time to start over and make amends with people you offended in the past. Though maybe the most important person is to forgive yourself.

Karen Frances McCarthy is a best-selling author and  former major media political journalist. She now writes about spirituality and religion.