Yoga is a peaceful practice that for thousands of years has taken the fearless wisdom seeker on a journey that begins and ends with(in).  It sounds a bit contradictory, but life as we know is full of contradictions.  It is the Yin & Yang of the universe that keeps it all together.  Yoga goes as far as to break it down into eight understandable approaches called “limbs.” When followed and incorporated into your daily life becomes a handbook of sorts for life.   We believe it is our very goal in life to get back to our “divine” self and that can only be done after the realization that we have a physical, mental and spiritual side.  Does that include spiritual activism?

The eight limbs, or steps to yoga, are as follows and the very first one is seems to me to refer to “Spiritual Activism” and the one we will be investigating today and you will see how this applies in today’s world.

Pratyahara :  Control of the senses

Dhyana :  Devotion, Meditation on the Divine

Samadhi :  Union with the Divine

1. Ahimsa – Compassion for all living thingsThe word ahimsa literally mean not to injure or show cruelty to any creature or any person in any way whatsoever. Ahimsa is, however, more than just lack of violence as adapted in yoga. It means kindness, friendliness, and thoughtful consideration of other people and things. It also has to do with our duties and responsibilities too. Ahimsa implies that in every situation we should adopt a considerate attitude and do no harm.

Satya means "to speak the truth," yet it is not always desirable to speak the truth on all occasions, for it could harm someone unnecessarily. We have to consider what we say, how we say it, and in what way it could affect others. If speaking the truth has negative consequences for another, then it is better to say nothing. Satya should never come into conflict with our efforts to behave with ahimsa. This precept is based on the understanding that honest communication and action form the bedrock of any healthy relationship, community, or government, and that deliberate deception, exaggerations, and mistruths harm others. ii

3. Asteya - Non-stealing Steya means "to steal"; asteya is the opposite-to take nothing that does not belong to us. This also means that if we are in a situation where someone entrusts something to us or confides in us, we do not take advantage of him or her. Non-stealing includes not only taking what belongs to another without permission, but also using something for a different purpose to that intended, or beyond the time permitted by its owner.iii   The practice of asteya implies not taking anything that has not been freely given. This includes fostering a consciousness of how we ask for others’ time for inconsiderate behavior demanding another’s attention when not freely given is, in effect, stealing.

4. Brahmacharya - Sense control Brahmacharya is used mostly in the sense of abstinence, particularly in relationship to sexual activity. Brahmacharya suggests that we should form relationships that foster our understanding of the highest truths. Brahmacharya does not necessarily imply celibacy. Rather, it means responsible behavior with respect to our goal of moving toward the truth. Practicing brahmacharya means that we use our sexual energy to regenerate our connection to our spiritual self. It also means that we don’t use this energy in any way that might harm others.iv

5. Aparigraha - Neutralizing the desire to acquire and hoard wealth Aparigraha means to take only what is necessary, and not to take advantage of a situation or act greedy. We should only take what we have earned; if we take more, we are exploiting someone else. The yogi feels that the collection or hoarding of things implies a lack of faith in God and in himself to provide for his future.v Aparigraha also implies letting go of our attachments to things and an understanding that impermanence and change are the only constants.

The Yoga Sutra describes what happens when these five behaviors outlined above become part of a person's daily life. Thus, the yamas are the moral virtues which, if attended to, purify human nature and contribute to health and happiness of society.  [1] 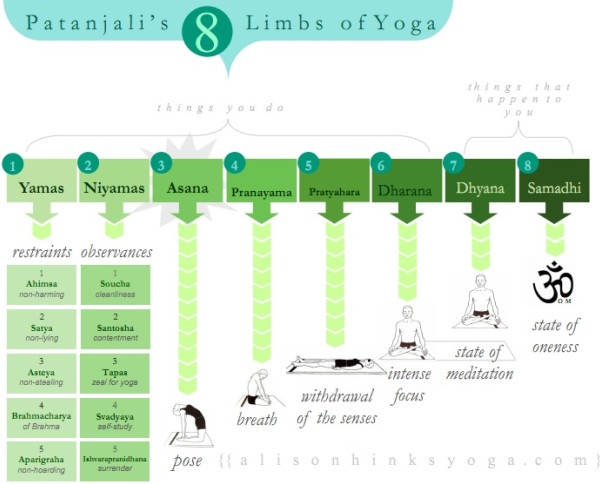 Lessons After the Death of My Partner