Stephen Hawking - A Man Who Reached Beyond All Limitations

“Intelligence is the ability to adapt to change” – Stephen Hawking

This Stephen Hawking Numerology tribute celebrates the life of a great English physicist, scientist, author, and lecturer. As we honor his journey, we also honor the capacity in each of us to reach beyond our limitations. Hawking seemed to live each day with wonder and fascination about the meaning of the universe. His driving force:  “what can I learn?” compared to “what can’t I do?”.

Hawking was born January 8, 1942. Twenty years later, in 1963, he contracted ALS, a form of motor neuron disease, and was given two years to live. Yet nothing stopped him from his pursuit of the intellect or inspiring others. In spite of being bound to a wheelchair and dependent on a computerized voice system for communication, he persisted in reaching for the adventure of life for his entire 76 years.

Liane Sidebar (if you want to take this out, up to you. also the pi is from wikipedia)

PI-Day
Hawking died on March 14, 2018. I found this so interesting, almost as if he chose the day as a final esoteric witticism. March 14 (3.14) is considered PI Day, celebrating the mathematical symbol. The Greek letter  “π” represents the ratio of the circumference of a circle to its diameter.
It is more like a transcendental symbol of the infinite without repetition or pattern. Point being, if one can choose when they are going to die, I believe Hawking had his last “ha” moment. Read more here about Pi and Pi Day. http://www.piday.org/learn-about-pi/ Liane, this link goes to info on IDay.. if you want to take it out, up to you.

Viewing the numerology charts below, you can see the many sides of Hawking’s personality and journey in life. 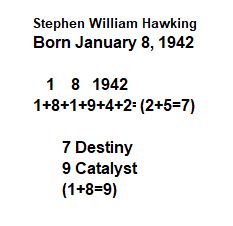 The 7 destiny is a life path of seeking the unknown, that which is not obvious to the normal eye. Sevens are unique nonconformists who thrive on inward thought and spiritual ideals.  They do not strive to be like everyone else. It is the lesson of every seven to learn to be comfortable in their own uniqueness, as they often feel like outcasts and can tend to be inhibited and shy. When they do embrace their gifts without judgment, they can step out and inspire others.

Hawking is a profound illustration of the enlightened seven. Trapped in a body that could not function without a machine to speak and a wheelchair to get around, he managed to teach, lecture and even be a TV celebrity. (The Simpsons/Big Bang Theory, etc.)
Other popular and successful 7 celebrities are Johnny Depp and Princess Di.

(Liane, you can leave out other celebrities if you want.)

Catalyst number – (add the birth month + birth day) is a “9”. The catalyst number represents what inspires you on your life path. The nine is the number of transformation and change. So what inspired Hawking on his path of seeking the unknown in a unique way (the seven destiny) was the pursuit of knowledge, change and always asking “Why?” and “How?”.

To get a full picture of the influences of numerology in a person’s life, numerologists look at the birth name on the birth certificate as well as the name a person is called. Often times there are nick-names or changed names due to marriage, pen names or stage names. Each variation of a name has an influence in a person’s personality and expression in their lives. Hawking’s two names show much diversity in personality and vision.

As Stephen Hawking, his soul’s essence is a “2” – a quiet and sensitive demeanor that gets along with others. The “3” in Stephen William Hawking gave him a creative essence that is more demonstrative.

The personality number is considered how the world sees you and what you are attracted to.  These two numbers, the 5 and the 11 are complimentary. The 5 is very charismatic and the 11 is a master number that represents leadership and inspiration.

The expression number is how a person expresses themselves. In Hawking’s chart, these are the most diverse vibrations.  The 7, like his destiny, expresses self as a unique, quirky and often inward. The 5, as seen in “Stephen William Hawking”, is outgoing and social. As Hawking ventured forth on TV or a space program with astronauts, Hawking seemed fearless, enjoying life fully.

What an inspiration for us all.

“Look up at the stars, not down at your feet.” —Stephen Hawkins